"What size generator do I need for my RV?" is probably the first question folks ask when shopping for a portable power source. And not only the first, but rather the most essential question, and the logical departure point for the selection process. To answer this critical question correctly, you have to understand your RV's power needs, and that's not really a complicated task.

What Size Generator Do I Need for My RV: The Basics

Choosing an RV generator involves a little more science than merely buying the sexy yellow number with all the bling. Get it right, and you will have years of hassle-free camping even if you expand your power needs. On the other hand, if you get it wrong, you'll end up doing more cussing than relaxing.

So, how do you work out "what size generator do I need for my RV?" Well, to start with, you need an accurate figure for the total amount of power all your RV appliances consume. Once you have that nailed, it's not hard to come up with a reasonable rating for your generator.

The hardest part of the process is getting to that total power number. To calculate your power demand accurately, you'll need to have some understanding of how electrical power ratings work. And perhaps most importantly, how your appliances consume power while they work.

This takes a bit of leg-work and some school-room math to achieve, so let's jump right in and see how it works.

Let's start by taking a look at precisely what appliance power ratings are and how they affect your total power load. This will help you answer the what size generator do I need for my RV question.

You often hear folks saying that they don't get the whole power rating thing because "they're all 120 volts, right?" This is very true, but nowhere near the mark regarding how much power they draw. Let's look at the facts.

A power rating in watts is on all electric devices. This is an indication of the amount of electrical power that device consumes while it runs. And it's this rating you need to consider when asking what size generator do I need for my RV.

In most cases, the appliance or equipment will feature a watt rating printed on its specification tag or sticker. If it doesn't, or the tag is illegible, it's fairly easy to consult a standard power rating chart for a safe average number.

The differences between starting and running power

There is one appliance characteristic you'll need to understand if you want answers for "what size generator do I need for my RV?" And that is starting versus running power consumption.

Electrical equipment, particularly items with electric motors or heating elements, draw a lot more power when they start than they do while running normally. This increased demand is known as the surge or start-up power. To accurately gauge the size of your generator, you'll need to know what the surge power ratings are for at least the bigger appliances in your RV.

Most generators are rated to compensate for surge and running power differences and will feature dual power ratings. Fortunately, surge power demand only lasts for a couple of seconds before the appliance settles down to running conditions. You will, however, hear a distinct drop in the generator revolutions when one of these appliances starts up.

Surge power ratings are often printed on the appliance specification tag but, again, if not, it's simple to calculate.

​Matching Generator Power and Specifications to Your Needs

Once you have at least a general idea of what your total and individual appliance power consumption is, you can build a profile for your generator.

Now air conditioners are, without a doubt, the biggest power hogs in any RV. So if anything will have a fundamental effect on your choice of a generator, your AC will be that thing. In most cases, if you are running your AC on generator power, you won't be able to run too much else.

Let's check out the specifics.

Obviously, your generator's output would need to be, at the very least, equal to that number. So, let's say you have a generator that's rated for 4,000 watts of surge and 3,500 watts of running power. This means that while your AC is running, you'll have between 1,500 and 2,000 watts of excess capacity to play with.

Let's look at what you could do with that excess power, remembering that your fridge runs all the time at around 200 watts. You could then run your microwave at about 1,000 watts and, say, a coffee maker at around 600 watts. If you wanted to use an electric grill at approximately 1,700 watts, you'd have to switch everything else off to stay within the limits of the generator.

As you can see, using a generator to power your RV will almost always be a juggling act. You can be sure of one thing, though; you'll become an authority on how much power appliances consume pretty quickly.

It goes without saying, of course, that buying a 9,500 to 7,500-watt generator would give you more flexibility. That is, however, a question of budget. And bigger generators use more fuel and eat up more storage space. So, within reason, bigger isn't always better, as long as you don't extend your running demand into the surge limit of the generator.

Generator run time refers to the amount of time a generator can run at around 50 percent load on a single tank of fuel.

This is a fairly important consideration if you are running your fridge all the time, which you probably will. If you have a generator with a 10 to 12 hour run time, you can top up before you turn in and only have to refill the next morning.

This is really convenient unless of course, you like getting up at 3 a.m. to refill your generator. In general, run times of 8 hours or more are sufficient.

People often mistake portable generator power as less dangerous than the main grid power. This is absolutely not true, and generator power is equally capable of delivering fatal electric shocks. For this reason, your generator should feature the same types of overload and short circuit protection you have in your home.

The majority of generators do have safety circuit breakers, but if yours doesn't, it's not the end of the world. It's relatively easy and affordable to retro-fit safety breakers -- just make sure that they are suitably rated. Twist-lock outlet sockets are also handy for preventing extension cords from being accidentally pulled out during use.

Planning Ahead for Expansion

When you get around to buying a generator, also try to keep planned upgrades to the RV or appliances in mind.

It's good practice to build an additional 20 percent or so into your generator power capacity to cover these eventualities.

​Choosing Accessories for Safety and Convenience

While you are shopping for a generator, it's usually a good time to buy some additional equipment to compliment your RV power grid -- if your budget allows. Here are a couple of great additions to your portable power arsenal.

This 40 foot, 30 Amp extension cable is outstanding for extending your power grid. Manufactured from durable 10 gauge cable and featuring twist-lock connectors and a cord organizer, the Vevor extension is a great, well-made, and durable RV power accessory. 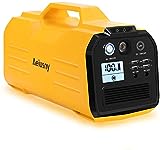 The Aeiusny UPS and battery pack is a really convenient bit of gear that allows you to power small appliances where you can't use your generator. It also doubles as a UPS for computers and laptops in the event of a mains grid or generator failure.

​What Size Generator Do I Need for My RV: The Summary

Hopefully, you'll be a bit better equipped to answer the what size generator do I need for my RV question now. As you see, there are no magic-wand solutions to this issue, and each case will depend mainly on personal realities and needs.

There is one standard through all this, though, and that's safety margins. When you have assessed your power needs, build a 20 to 30 percent buffer into your choice of generator power rating. And there is no harm in buying a generator that generously exceeds your requirements if your budget allows.

Please share any insights you may have into generator ratings in the comments area below.

How Much Solar Power Do I Need For My RV? We’ve Got The Answers For A Variety Of Classes

Gas Vs Diesel RV: The Pros And Cons Of The Two Options